Here’s How Proposed 401(k) Changes Might Affect Your Budget

Congress is considering legislation that will give employees’ retirement savings for people in their 60s a boost. Under the proposed new laws, annual catch-up contribution limits to 401(k)s and IRAs could increase.

The changes are designed to allow aging workers to make up for insufficient retirement savings. The discussion below outlines those changes and to who they will impact.

Once U.S. workers reach the age of 50, they can start making “catch-up” contributions to their retirement accounts. These catch-up contributions exceed the annual limits for workers under 50.

The purpose of catch-up contributions is to help older workers who are nearing retirement save more or make up for the lack of savings when they were younger. It is not unusual for people in their 20s to either shrug off the idea of saving for retirement or not have the means to do it.

Under the pending legislation in the House, annual catch-up 401(k) contribution limits for those between the ages of 62 and 64 would increase to $10,000. However, the contributions would need to be made on an after-tax basis instead of a pre-tax basis. 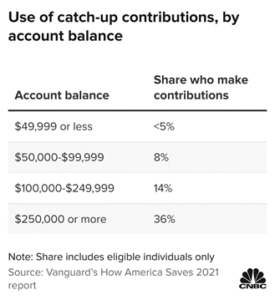 In addition, the contributions could be made under the current pre-tax arrangement. You will not pay any payroll or income taxes on those contributions until you retire and start withdrawing the funds.

The IRS has confirmed normal changes to 401(k) and IRA contribution limits for 2022. These changes will apply to both employees and employers, regardless of the employee’s age.

This includes employee and any employer matching contributions. Many employers offer these matches as incentives, but they usually do not apply beyond a certain percentage. So, for example, your employer might match 100% of the first 5% of employee contributions.

Of course, you could contribute more than 5% of your salary. However, you would need to figure in the $2,500 from your employer to stay under the $61,000 limit.

But if you happen to earn more than $305,000, the income above that limit would not be eligible for 401(k) contributions.

Some workers keep and contribute to multiple retirement accounts, such as a 401(k) and a Roth IRA. If all contributions between accounts do not exceed the maximum contribution limits, you can do this.

Roth IRAs work differently from traditional retirement plans since the contributions are made post-tax. However, once you reach retirement age and are ready to withdraw, you will not pay any additional taxes. Click on the following link to learn more.

Workers who earn less than a certain amount are eligible for a tax credit to contribute to a retirement plan. This includes traditional 401(k)s, IRAs, and retirement accounts for employees in the public sector.

In 2022, the income threshold will increase to $34,000 per year for individual taxpayers. For the head of households, the maximum annual income will go up to $51,000. And for married couples, the combined yearly income limit will increase to $68,000.

If you earn $34,000 or less per year and contribute to a retirement fund, you can still qualify for a savers’ credit on your income tax form. The tax credit usually represents 10% to 50% of the first $2,000 of your annual contributions.

401(k) contribution and income limits will already increase for 2022. However, they could increase even more for older workers in their 60s.

These proposed changes will apply to catch-up contributions only and not average savings amounts. The Senate’s version of the legislation is viewed as more favorable to older workers.