Is it Really More Expensive to Eat Healthy Foods?

Friday night I watched Jamie Oliver’s Food Revolution for the first time. Let me just say, I’m sad I missed pretty much the entire season. What an eye opener!

For those who haven’t watched, a (very) quick synopsis of the show is that Jamie Oliver is out to change the school menus in the unhealthiest town in the United States. Out with processed foods and in with whole foods. 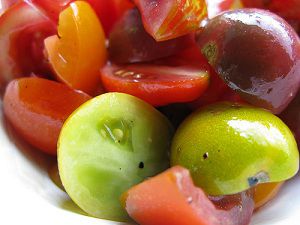 But is it true for everyday families? Is it really cheaper to eat processed foods than whole foods? I believe the answer is yes…and no.

On the one hand, a person can score free groceries by combining sales and coupons on processed foods. One search of the internet will reveal hundreds of stories of people buying $200 worth of groceries for $30. You just can’t do that if you’re only buying whole foods.

On the other hand, without using coupons, I’m not sure processed foods are less expensive. Frugality is usually a time-money tradeoff, and taking the time to prepare food from scratch will generally save at least a little money.

Locally grown produce in season will generally be less expensive (and more fresh) than produce that’s been shipped thousands of miles from Chile out of season. That’s even more true, if you take the time to pick it yourself from a local farm.

The big exception is meat. Free range, grass fed, all natural meat is usually a lot more expensive than chicken and beef that are mass raised and processed. Even then, though, sometimes you can find exceptions. I stopped at a grocery store in Salem on Friday to pick up a few things for our trip home, and the guy in front of me was buying whole, free-range chickens for less than a dollar a pound. And my brother told me that he recently found free range, organic chicken breasts on sale for less than their mass-produced counterparts. But that’s the exception, rather than the rule. I’m hoping to see change in the coming years, though.

Now that our homeschool is out for the summer, I’m planning on getting into a “make it from scratch” routine to move us away from processed foods and toward whole foods. I figure if I can set down a good routine during the summer, it will be easier to keep up with the cooking and baking while I’m teaching. You can bet I’ll be looking for every cost-saving measure available to those who want to eat healthier.

What do you think? Can you eat well on a tight grocery budget? Do you have any tips for doing so?

36 Replies to “Is it Really More Expensive to Eat Healthy Foods?”