Want to Save Money? Reduce Your Waste

One of the sad realities of modern living is that we live in a consumer society where almost everything is disposable. Unfortunately, this can lead to spending more money over time. If you want to get more value for your money, and live better, consider reducing your waste. 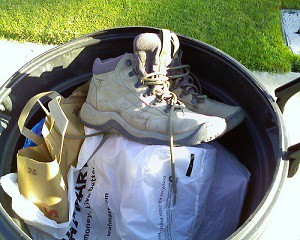 One of the best ways to reduce your waste and save money is to buy less. Clearly, there are needs that we all need to buy in order to survive. However, I’m not saying that you have to cut the wants from your life, either. What you should do is look at your spending priorities, and decide what’s really important to you.

You might be surprised at how often you spend money to purchase something that you don’t really even want — much less need. If you are filling up your house with clutter that you don’t even care about, that’s wasted money.

Stop buying as much stuff, and you will have less waste in your life. You won’t have spent money on things that lay uselessly in the basement or attic, and you won’t regret eventually having to throw it out or give it away later, either.

This principle applies to subscriptions and other items that you don’t use. If you aren’t going to the gym, or if you can get the same entertainment with the help of streaming services rather than paying for cable, cancel your subscriptions.

A little conscious spending can go a long way.

One of the reasons that our trash bins fill up is that we have to throw away all the disposable, low quality items that have become a fixture of modern life. Instead of buying cheap items that you will just throw away, consider buying higher quality items.

There are some things that it’s worth paying extra for. If you can get a pair of shoes that will last you two years rather than six months, you are likely to save money over time, and reduce the amount of waste you have in your household. From clothing to cookware to appliances, spending a little more now can save you money later, since you don’t have to keep replacing worn out and broken down items.

A couple of years ago, I noticed that we were throwing out quite a bit of food. And we aren’t the only ones with this problem. According to a recent study, Americans throw out about 40% of their food, wasting about $165 billion annually.

That’s a lot of waste — and a lot of money thrown out with the trash. When we realized how much money and food we were wasting, we decided that the answer was meal planning. Too often, we didn’t plan our meals ahead of time. We bought whatever we felt like at the store, but didn’t know how to use it. Or we’d get busy, and not have a plan for dinner, and resort to take out.

Not only did this lead to more expensive meals on a regular basis, but it also meant food spoiled, and that we weren’t eating healthy. Once we started with the meal planning, though, things began to change. We thought about what we wanted to eat during the week, and then made a shopping list based on our meals.

We knew what we were going to eat for dinner, were prepared to make it, and began using much more of our food. We rarely throw out food now. Our dollars aren’t wasted at the store, and we don’t feel bad for wasting resources.

There are other ways to plan ahead as well. Whether you plan your clothing purchases around what you know will be seasonal sales, or think about how to best invest your money, having a plan can help you reduce money leaks in your budget.

When your money is wasted, it’s not working on your behalf. Look at ways that waste could be draining some of your wealth away. Reduce the amount of waste in your life, and then put the money you save to work investing in a better financial future.

3 Replies to “Want to Save Money? Reduce Your Waste”