What Are the Most Frugal Countries?

Not all countries spend money equally, affecting their political decisions and citizens. However, several countries have found a way to save money through frugal spending habits, and there are some lessons that others could note.

Keep in mind that there are a lot of factors that can affect how much a country spends, like population, health care, and military spending. Still, some of the following countries might surprise you. 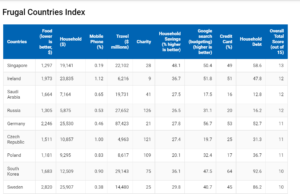 With an average annual salary of over $50,000, the citizens of Singapore can save a decent percentage of their income each month. That’s because the country itself doesn’t spend as much as other countries, so it’s able to transfer those savings to the people.

Every year, Singapore spends the least of any country and can hold back almost 50 percent of its GDP. With frugal policies and spending, the country’s policies allow citizens to save on several costs, from food to travel to cell phones.

After being toward the bottom of the top 10 frugal countries a few years ago, Ireland has made great strides in its spending habits to reach the number 2 spot. That’s because the country has learned to be conservative after the massive financial upheavals they’ve faced.

Since then, people can save almost 10 percent of their monthly income. With costs of living lower due to being more self-sufficient, the people then put money back into the country’s economy in a cycle of frugality that benefits both sides.

One of the biggest sources of spending by countries is for natural resources, something that Saudi Arabia has plenty of. With oil as one of the country’s leading exports, Saudi Arabia can save a lot of money on something most countries have to pay for.

Because of this self-reliance, Saudi Arabia doesn’t spend as much and the people are then able to set aside part of their income. Citizens of Saudi Arabia have some of the lowest home-related debts on the planet because their country’s frugality trickles down.

While Sweden’s people owe more debt for their housing over time, it’s because the population isn’t worried about paying anything off. Between a higher amount of personal time and higher wages when they do work, Sweden’s citizens have ranked among the happiest people for years.

It also helps that Sweden doesn’t spend much on many of the bigger sources of payment, like judiciary confinement and increasing military power, but the European Union also makes it possible for many countries in Europe to save more.

Germany is one of the most frugal countries out there, but their lack of spending is reflected in their people. Many banks in Germany have more money deposited than is ever withdrawn and most citizens can save a tenth of their monthly income.

This is similar to Belgium, a close neighbor, that has similar savings and almost no interest nationwide. Not only do they encourage learning about ways to save and invest, Belgium actually gives tax breaks for saving money.

Both of these countries have governments with lower debt, which is largely due to being part of the EU and restricted spending on the big areas.

In North America, the country that spends the least is not the United States. Canada’s healthcare system, lack of judicial issues, and barely-there military spending allow them to have a much lower GDP than their neighbors to the south.

Because of that, Canadian people are generally able to save as well. With an average salary of over $40,000, Canadians do have one of the higher home debts of the countries on this list. However, it’s more from learning good spending habits as opposed to not being able to pay.

What Can Other Countries Learn?

There are a few takeaways among the most frugal countries in the world that could not only lower national debts, but strongly affect the costs and emotional taxation on their people. The main ones are education, judicial control, and balanced incomes.

Teaching How to Save

One of the failures in modern education is not preparing young adults for the real world of saving, taxes, and financial knowledge. A common denominator among frugal countries is that they teach their citizens to save, sometimes even encouraging or incentivizing them.

It would greatly benefit both sides because the government would get more money from citizen spending if they had more while the people would be happier and less stressed.

Another major thing that these countries share is a lower number of prisons and inmates due to reduced sentences and fewer laws. With these factors in place, the government spends less on inmates, and citizens are taxed less.

The last main point of frugality seems to be a narrower income gap. While there are rich and poor, the average citizens of these countries make enough wages to be able to save. Not only does this reduce the social stresses, but it allows them to buy back into the country.

This is also because of lower inflation among their currency-to-population ratio and lower costs due to many of the frugal countries being self-sufficient. Less importation of goods is a good start to lowering costs to your citizens.

Image by Madrugada Verde via Shutterstock.com