Would You Work for Less than You Think You Deserve?

I have a relative who just finished a temporary summer job and is back on the hunt for something a little more permanent. However, he insists that he “can’t work for less than $10 an hour.” He has an idea of how much his work time is worth, and he says he won’t commit to a job for less.

This attitude got me thinking about the way we sometimes look at work, and the jobs available, and make a determination about what we are willing to work for. I certainly have a dollar amount that I think I am “worth” when I engage in my freelance work. 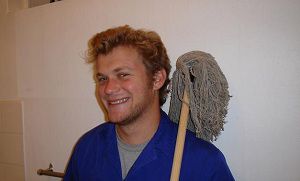 But, while I don’t have to take jobs that I think are “beneath” my pay grade, I like to think that I would take such jobs — if I had to.

Do You Have to Get Something?

The operative phrase here is “if I had to.” The reason that my relative doesn’t feel like he “has to” get something just to have a source of income is because, even though he’s moving out of my basement at the first of the month, he feels like he can just fall back here. At the very least, he can move back in with his parents if he can’t find a job “worthy” of his expectations.

Yes, he’s expected to be doing something while he lives here (and at his parents’). He’s signed up with a temp agency. So, technically, he’s “doing work” even though he doesn’t have an actual job or other source of income. I may need to re-evaluate my definition of “doing something,” but that’s a post for another day.

The point is that if he had to get a job to survive, a minimum wage job might suddenly be acceptable. I would be willing to go back to working for peanuts as a freelance writer if I needed the money to feed my family. When you can’t make ends meet, what you are willing to accept, even if you think you “deserve” more, changes.

Are You Really Worth that Much?

On the other hand, you also have to ask yourself whether or not you are truly “worth” that much. Are you really going to find someone willing to pay you what you think you deserve? In my town, a job that pays $10 an hour is a rare thing for someone who doesn’t have a marketable skill, and has no training or education.

My relative thinks that because I can basically demand what I want to be paid, he should be able to as well. However, he has very narrow training that doesn’t easily translate to another field. He hasn’t held a steady job for more than a few months at a time for quite a while, and he has quit jobs in such a way that references are few and far between. And he has no technical certification, professional training, or degree. But he thinks that he “deserves” $10 an hour, and insists that he won’t work for less. I think he has an inflated idea of what he can command in this job market, considering what he brings to the table.

As you can tell, I’m having a very hard time wrapping my head around this one. I ask for what I want in my home business because I have years of experience under my belt. I also have a degree in journalism. I have experience and education. And references that will vouch for me. When I finished my four-year degree years ago I was happy to land a minimum wage job, and minimum wage at that time was less than $6 an hour. And my family of three managed to live on it by practicing a little frugality.

I know that $10 an hour isn’t a great deal of money. In some areas, it would be impossible to live on that. However, where I live, minimum wage is actually doable, if you are willing to make a few sacrifices in your lifestyle while you look for something better.

What do you think? Do you have a realistic idea of what you are “worth”? Would you work for less than that?

3 Replies to “Would You Work for Less than You Think You Deserve?”