It’s a new year and for a lot of you, it means a new try at keeping a budget. I know I slacked on keeping a budget toward the end of last year, and I’m ready to get back on track! My favorite tool for planning my budget has always been YNAB Pro. I started using it after one of my readers recommended it a couple of years ago, and it hasn’t let me down.

Recently the makers of YNAB Pro released YNAB 3, and since I was so happy with YNAB Pro, I decided to upgrade. Now that I’ve had the chance to play with YNAB 3 for a few weeks, I feel I can give you a good review.

If YNAB Pro was so great, what could possibly be improved in YNAB 3? Well, there are a few things.

Ability to Search Your Register

With YNAB 3 it is possible to perform a search of your transaction register. You can search by date, category, payee, keyword, and dollar amount. If you can’t figure out why you don’t have money left in a certain budget category, you can search for transactions in that category, to see exactly where all the money went. 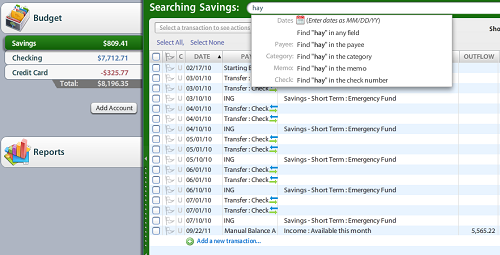 Or you can search a payee. I had to do this a couple of weeks ago, when I couldn’t figure out why I still had money in my mortgage category, since I’d paid my mortgage. It turns out I must have entered the wrong category, and I found the transaction filed under auto-insurance. Sometimes scrolling on the mouse is a bad thing.

I love the new reports! My favorite report is the spending trends reports. It’s a line graph, with a different colored line for each spending category. If you look at the line graph over several months, you can see at a glance whether your spending in that category is trending up or down. It’s a great way to see whether your efforts at being frugal are working or not! 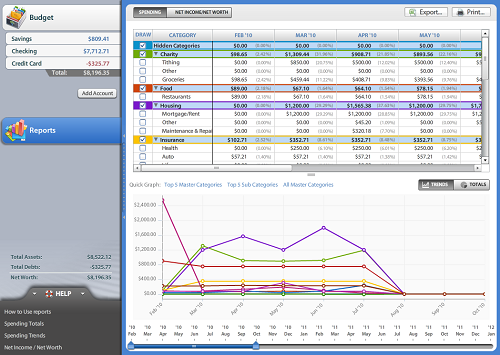 This is not a license to go out and overspend! However, there are times, such as when you buy something for work and are later reimbursed, that you might overspend a category, but not want the overspending to reflect on next month’s available money.

Easier to Use if You’re Still Building Your Buffer

The biggest complaint I had about YNAB Pro is that it was a little confusing to use, if you didn’t already have one month of income in your buffer. YNAB operates on the premise that you spend this month’s income next month, so you always have a month’s worth of income in your account. It’s a great concept, but in practice, it made YNAB Pro a bit difficult to work with until the buffer was in place. 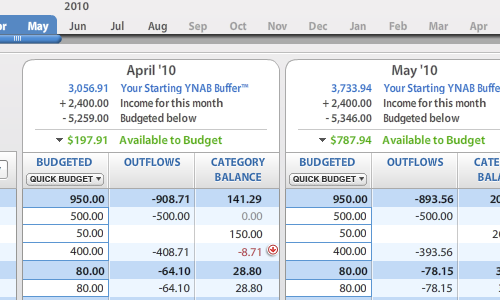 In YNAB 3 it is much easier to start without a buffer. First you enter your income, then you budget it. But don’t budget for all your income. Your unbudgeted income will show up as your buffer. Since the amount of your buffer is listed right at the top of your budget, you can see it grow every month. This is actually very motivating! Once you have a buffer of a month’s worth of income, you can start budgeting for every penny that comes in. Obviously you don’t want to increase your spending, but you can budget more money toward an emergency fund, retirement, or a vacation.

YNAB 3 is very slick, from a visual standpoint. I’m a visual person, so I like being able to see the overall status of my budget with a quick glance.

Above the budget is listed my starting buffer, my income for the month, what I have budgeted for the month, and what money is still available to budget.

Below my budget I can see what is available to budget, the amount of income available next month, my overspending for the month (in red, so it really makes you think STOP!), and the starting buffer for next month.

I already talked about this above, but I really like the trend report. As someone who is constantly on a mission to cut the budget, it is easy to look at a single line on the trend report, to see if my spending in that category is headed up or down.

The entire basis of YNAB 3 is four simple rules.

The first three rules are pretty explanatory. And the fourth rule simply means that there will be times you get off track with your budget. YNAB 3 helps you adjust your budgeting to deal with your mistakes, making it easy to get back on track, rather than giving in to the temptation to give up on the budget all together.

I love these rules. As someone who is trying to get out of debt, I don’t want a budgeting program that’s overly complicated. I want something simple that shows me my budget and shows me how much I have left in a given spending category, so I don’t overspend. YNAB 3 delivers exactly this. My goal is to get out of debt, and YNAB helps me move toward that goal by showing me my spending habits and helping me make a plan to do better.

Customer service at YNAB has always been first rate. Whenever I’ve had a question or concern, it’s been quickly addressed. In addition, there is a YNAB Message board, where you can ask questions of seasoned users and report problems you’re having with the software.

As frugal as I am, I had a hard time justifying spending $59.95 on budgeting software. However, I’ve found I’ve saved well over $59.95 just by tracking my money more closely and following a budget each month. In the end, it was $59.95 well spent. When I’m not keeping a budget, I know I blow that amount rather quickly without thinking twice. $59.95 works out to roughly $5 a month for a year. I know I save more than that by keeping a budget, so it’s well worth it to me.

I’m a person who wants a budget program, not an expense tracker. Many programs out there are great at tracking expenses. They give you a great report as to where your money has gone after you’ve spent it.

YNAB 3 is different. It shows you where your money is supposed to be going. If you’re headed out to buy clothing for your kids, you just need to take a look at your YNAB 3 budget before you head out, and you will know exactly how much money you can spend on clothing, without impacting your other budget areas. Tracking your budget this way prevents overspending.

While YNAB 3 is probably not for someone who has tons of complicated investments to track, it’s the best budgeting software I’ve found for people like me, who are trying to turn their finances around. Following YNAB’s 4 steps is the best way to get your finances under control and stop overspending, regardless of what budgeting software you use.